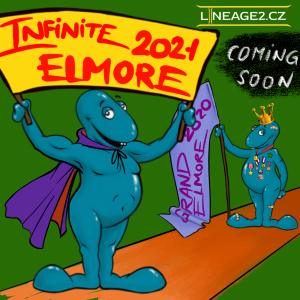 Dear players and supporters of the Lineage2.cz project, the summer holidays are approaching and we bring traditional information about the further direction of our project. We have been here for you since 2006, although the association was not established until February 2007. It is unbelievable, but we are celebrating 15 years of our joint operation!!!

We think it is appropriate to look back at our history and mention our previous projects:

We have 15 years of experience and 13 projects behind us. After much effort, we managed to make ourselves visible also on the international scene and gain the favor of foreign players.

We would like to thank all our players and many fans, without whom none of this would be possible. We feel the need to prepare something special for the 15th anniversary of our operation, and therefore we are preparing a new long-term project!

In September 2021, we will launch a long-term project Infinite Elmore - High Five, built on retail scripts and l2off core. We have been playing with this idea for a long time, but for many reasons we were not able to realize it. Fortune favored us and we were able to change that and we have been working on the preparation of the project since the end of 2020. We are currently fine-tuning the details and performing in-depth testing. You will be able to test the quality of the server during a beta test, which will begin sometime between 13th and 16th of August 2021.

As on previous projects, we want to discuss the server configuration with the community. We will gradually publish the details of the settings on our forum, where you will have the opportunity to comment on everything.

The basic setting of the rate will be decided by a poll that will be held on our Discord server (only verified users can vote). The poll will be closed on 28th of June 2021 and its results will be evaluated in a following article.

The exact launch date of the server will be published later on our website.

We look forward to our next joint adventure, your Lineage2.cz team.